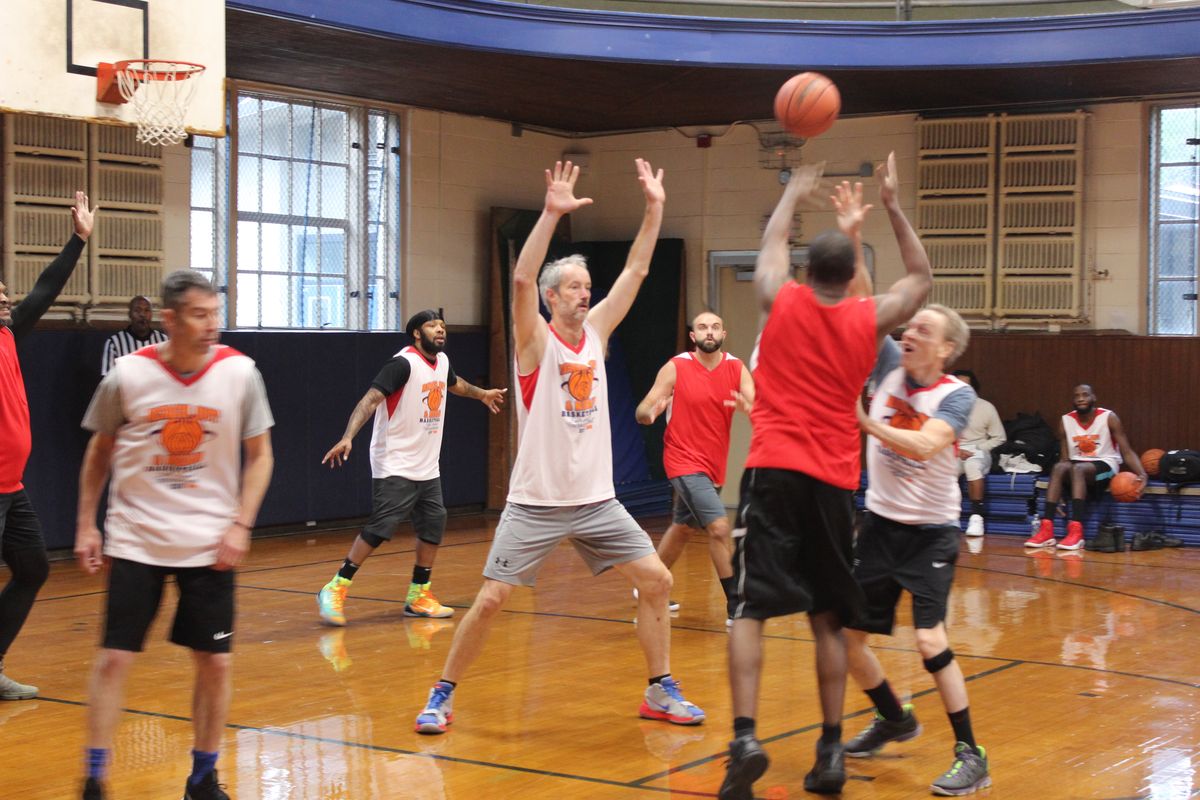 The idea for the Reach Out and Read Basketball Tournament was hatched six years ago on—not surprisingly—the basketball court. During the "run," an early-morning pick-up game that has existed at Germantown Friends School for decades, Mark Tucker, parent of three GFS graduates, and Hans Kersten, a pediatrician at St. Christopher's Hospital for Children in North Philadelphia, got to talking, and Kersten mentioned the hospital's Reach Out and Read program, a national nonprofit organization that trains pediatricians and nurse practitioners in early literacy practices and gives new books to children up to age five at their annual well visits. Since St. Chris's joined the program in 2001, it has gifted more than 800,000 books and provided literacy guidance to 300,000-plus families; however, the hospital needed funding in order to stay involved. Kersten's colleague, pediatrician Dan Taylor (GFS Class of 1982), is also a member of the morning "run," so suffice it to say that the creation of a basketball tournament in support of this critical literacy initiative was a slam dunk.

"This collaboration between basketball players, child advocates, GFS alumni, and GFS administration has been, and continues to be, the perfect mixture of motivated, empathetic individuals, who put the underserved community surrounding St. Christopher's at the heart of this event," says Taylor.

Since its inception in 2014, the tournament has raised $240,000 for Reach Out and Read, and purchased more than 87,000 books for St. Chris's. The event has evolved from one gym, eight teams, and 60 players to three gyms, 16 teams, and more than 150 players vying for the championship in a round-robin format. Most participants hail from Philadelphia and the surrounding areas, including many from St. Chris and the GFS community, but players have traveled from as far away as Syracuse, NY, and North Virginia to compete in the tournament.

"It's a win-win situation for all involved. An amazing, fun-filled, competitive event that brings GFS alumni, friends, and family together, with the underlying philosophy that all children in Philadelphia, no matter their zip code, deserve a shot at early childhood education and future school success," says Tucker, former GFS Head Basketball Coach and co-founder of the event. "I understand the science behind the Reach Out and Read Program in terms of advanced early development, but it's the smiling faces on the children that leave St. Chris, with book in hand, that makes it all worth it."

The players that come to the GFS "run" each week are a diverse group—physicians, lawyers, SEPTA workers, real estate developers, people from all areas and backgrounds. Yet they bond over their common love of basketball and their understanding of the importance and immediacy of supporting children in under-resourced areas of Philadelphia. "We know that many of the children surrounding St. Chris live in homes without books, and this inequity does not sit well with any of us," Taylor shares.

The Sixth Annual Reach Out and Read Tournament will take place on Saturday, October 26, 2019, from 9 a.m. to 3 p.m. at Germantown Friends School (31 W. Coulter Street, Philadelphia, 19144). Each participating team has fundraising goals, with a majority of the funding coming from individual and corporate donors. Every dollar raised goes directly to Reach Out and Read. To learn more about the tournament and the program at St. Christopher's (and how to get involved), go to reachoutandreadbasketball.wordpress.com.

Photo caption: St. Christopher's doctors Dan Taylor '82 (left) and Hans Kersten (middle, with arms up), co-founders of the Reach Out and Read Basketball Tournament at Germantown Friends School, on the court in 2018.