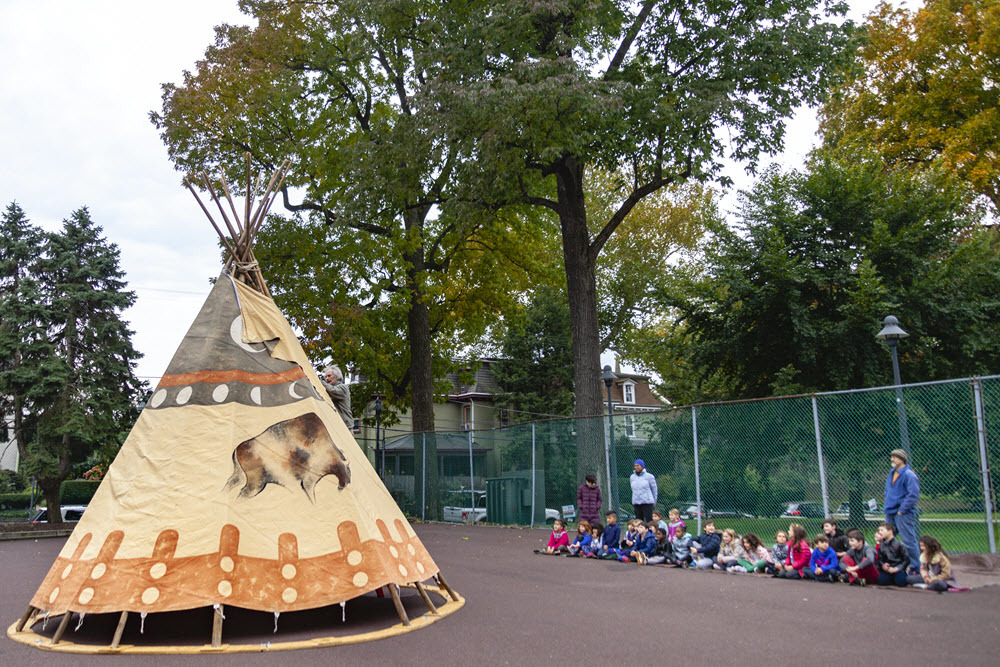 In October, our second grade classes worked with Robin Moore, a children's book author and storyteller, who led the students in constructing a tipi on the Pennsbury parking lot. Tipis are the traditional homes of the Lakota and Cheyenne, natives of the Great Plains of North America.

In October, our second grade classes worked with Robin Moore, a children's book author and storyteller, who led the students in constructing a tipi on the Pennsbury parking lot. Tipis are the traditional homes of the Lakota and Cheyenne, natives of the Great Plains of North America.

Our second graders have an ongoing relationship with teachers and students at Sapa Un Academy, a school on the Rosebud reservation in South Dakota, where many Lakota people live today.

To make sure that everyone got to participate in the tipi assembly, Robin put up the tipi outdoors twice, with groups of about 25 second graders at a time. All three second grade classes were involved in the raising of this amazing structure.

The raising of the tipi was an extension of their classroom studies, where students have been learning about the ancient ways of the native Lenape people, the indigenous people of this region, including the construction of a wigwam on the Lower School patio. In contrast, tipis—which can be readily transported and reassembled—suited the nomadic lifestyle of the Lakota, who followed the buffalo herds. During hunting season, the Lakota would move every 3-4 weeks.

Horses, introduced to the Great Plains by the Spanish explorers, became central to this lifestyle. Because there were no tall trees to make tipis with on the Great Plains, the Lakota had to travel hundreds of miles by horse to the Black Hills harvest the lodgepole pines that served as the tipis’ structure. The tipis would traditionally be covered with buffalo skins; Robin’s tipi has a canvas cover. 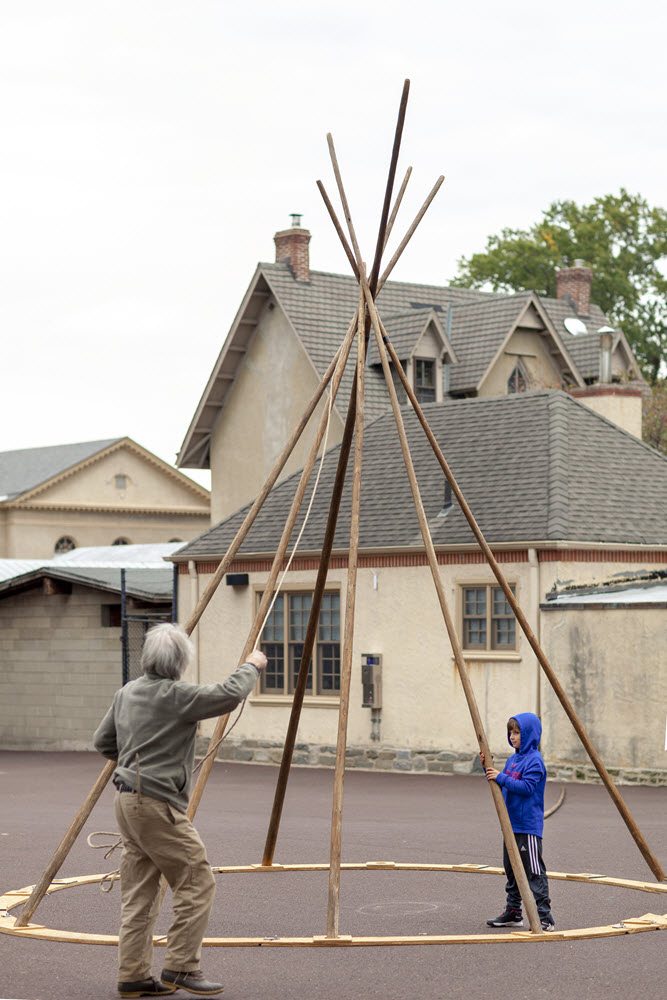 First, Robin and the students constructed the frame with the pine poles. Traditionally, a tripod of poles would be inserted into the ground for strength and stability to start, but Robin has created a frame that allows a tipi to be constructed on hard surfaces, like our playground asphalt.

After the frame was complete, Robin showed the students how to hold the tipi cover “drum-tight” and how to lash the cover to the lifting pole, which will enable the cover to be spread around the structure. 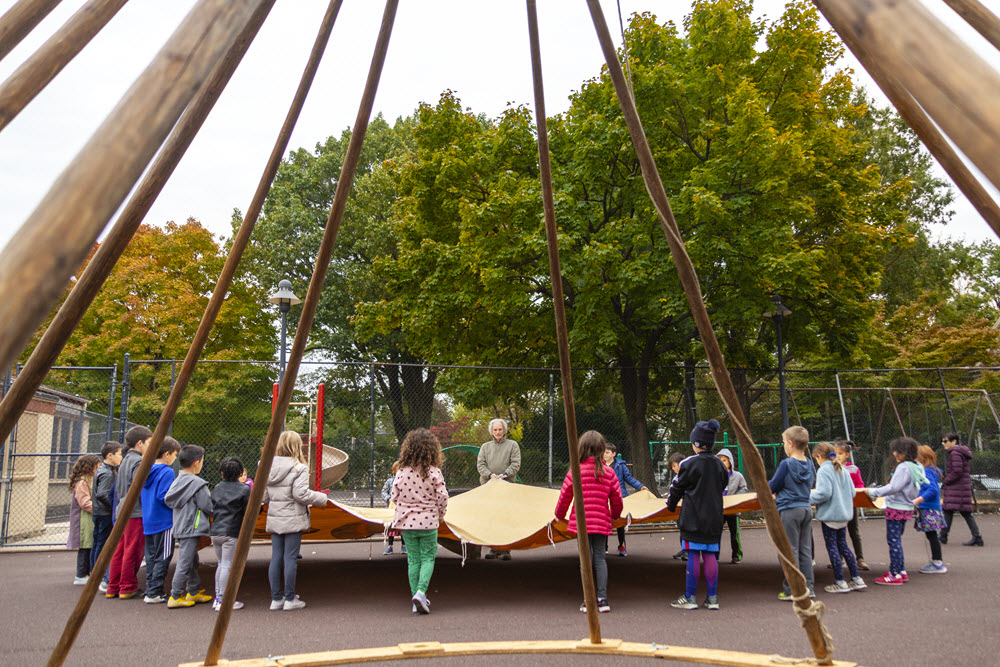 After the cover is in place, and the buffalo design on the outside is revealed, the kids cheered “Buffalo, buffalo!” and a child commented, “It looks so perfect!”

After the tipi was complete, Robin invited the students inside, where they sat and listened to Robin tell stories about how far the Lakota people had to travel to get tipi materials, and what tipis meant to their way of life. 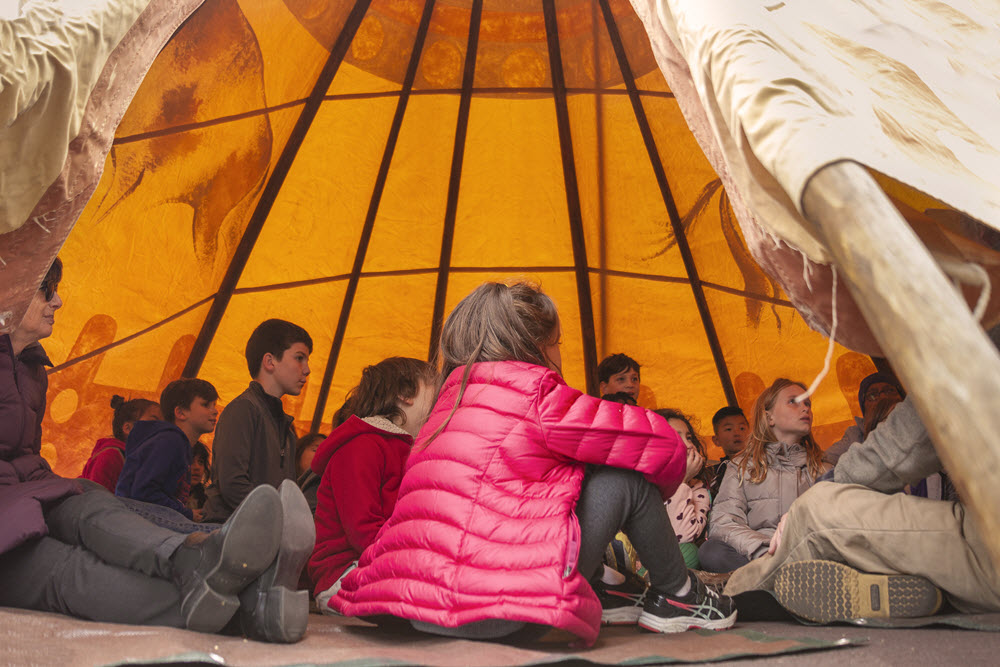 We thank Robin for coming to GFS and sharing an unforgettable experience with our students!