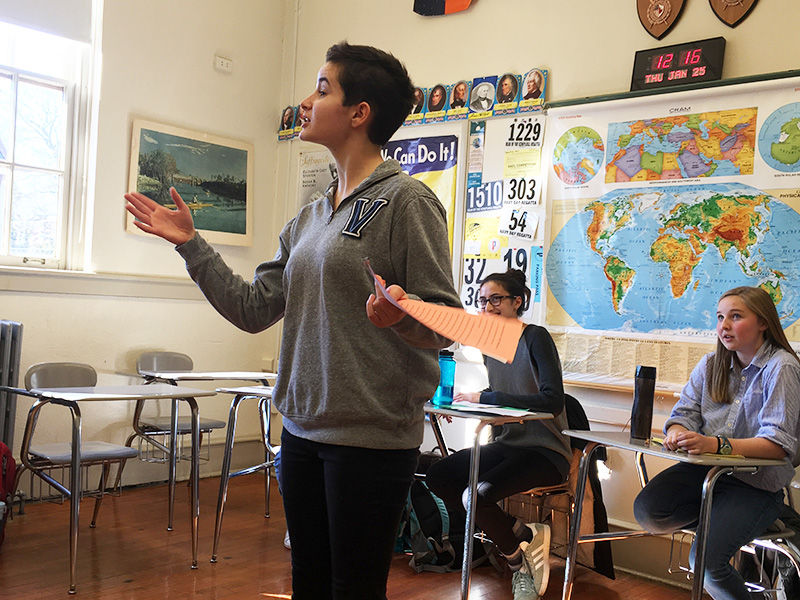 Jeremy Ross's January Term class on the Supreme Court continued its tradition of asking students to serve as arbiters of the most challenging contemporary legal issues facing our country.

Jeremy Ross's January Term class on the Supreme Court continued its tradition of asking students to serve as arbiters of the most challenging contemporary legal issues facing our country.

Open to tenth and twelfth graders, the course studies the Court’s jurisdiction and organization, and students select three cases on the Court’s docket for an up-close look, which culminates in three mock arguments by student counsel for both parties before a mock court of student justices who must then decide the case and justify their opinions.

One of the three cases brought before our GFS Supreme Court this term was "Masterpiece Cakeshop, Ltd. v. Colorado Civil Rights Commission," wherein Jack Phillips of Masterpiece Cakeshop declined to create a custom cake for a same-sex wedding. This case quickly became a national flashpoint, involving fundamental questions around the limits (if any) on free speech, how "free speech" can be defined, and whether businesses are permitted to discriminate against customers.

Corin Grady '18 and Madeleine McGrath '20 argued for the petitioner (Jack Phillips) and Alex Boyd '18 and Maya Keren '18 represented the respondents (Colorado Civil Rights Commission). Samantha Deutsch '20 presided as Chief Justice, and the rest of the class served as justices on the Court.

The petitioners argued that Phillips' custom cakes, as an artistic expression, count as "speech," and thus he can't be compelled to create a cake that does not align with his personal expressions. The respondents posited that the bakery business is a place of public accommodation, and that to deny service to any customer is a discriminatory practice and therefore illegal.

After deliberation, the justices arrived at a 4-4 split decision, which Jeremy broke in favor of the Colorado Civil Rights Commission. He applauded the students' efforts, remarking that it was an extremely difficult case to argue. "But, to quote my friend Byron, you go to the hard school."