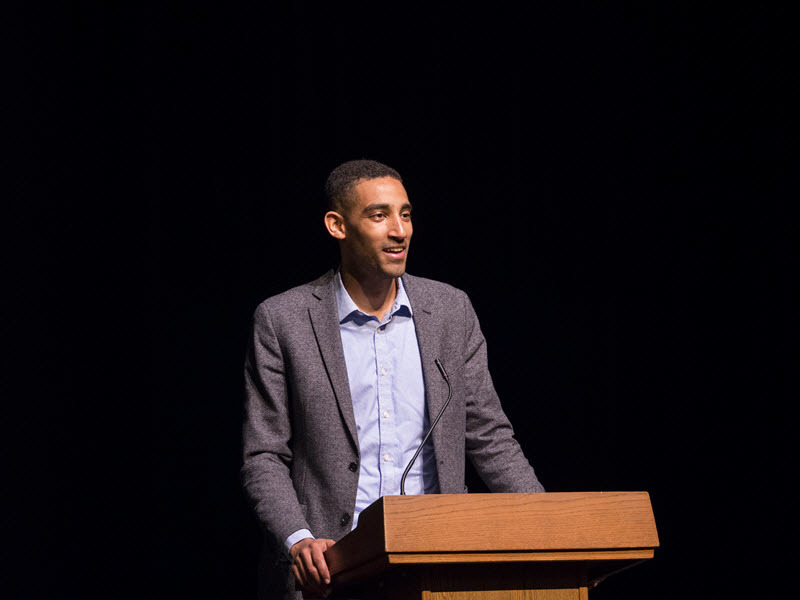 David is a Germantown native, and when he graduated from GFS, he left with a clear purpose: he wanted to help those who weren't afforded the same opportunities that he was.

David Gould '07 addressed Middle and Upper Schoolers at the Annual Alumni Assembly yesterday, speaking about his background and his time at GFS, both of which inspired him to seek a career in community service.

David currently works as the Deputy Director of Community Engagement and Communications for the City of Philadelphia's Rebuilding Community Infrastructure initiative (Rebuild). Philadelphia is actually rich in public city spaces—parks, playgrounds, libraries, and recreation centers—but lacks the money to maintain them all as they ideally require. Rebuild, a key initiative of Mayor Kenney's, seeks to change that. In his role, David liaises not only with the media but, crucially, with residents of the neighborhoods that these public spaces serve. He says this is the best part of his job, explaining, "I get to provide community members with a voice in the process."

David is a Germantown native, and when he graduated from GFS, he left with a clear purpose: he wanted to help those who weren't afforded the same opportunities that he was. Prior to working at Rebuild, David spent time at the William Penn Foundation, which he enjoyed, but he found that he wanted to be more hands-on with the communities he was trying to help.

In his career, David has found that his experience growing up in city neighborhoods, and at GFS, gave him a special set of skills that help him serve communities and amplify their voices in city government. David believes wholeheartedly that each person's unique qualities are a source of strength, and he advises, "Never be ashamed of who you are."

Here's the recording from the event: