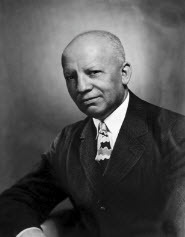 We're thrilled to be celebrating Black History Month across campus this month in all kinds of ways. We invite you to read here about the history behind this celebration, and the many ways students and families can get involved.

We're thrilled to be celebrating Black History Month across campus this month in all kinds of ways. We invite you to read about the history behind this celebration, and the many ways students and families can get involved.

The "Father of Black History"

Carter G. Woodson (pictured above) was an African American writer and historian known as the "Father of Black History."

Woodson lobbied schools and organizations to participate in a special program to encourage the study of African American history, which began in February 1926 with Negro History Week. The program was later expanded and renamed Black History Month. Woodson had chosen February for the initial weeklong celebration to honor the birth months of abolitionist Frederick Douglass and President Abraham Lincoln. [Source here.]

Facts Everywhere! Every day, the Daily Bulletin sent to Upper School students, faculty, and staff will feature a different Black History fact. And if you are on campus, please be sure to stop and look at the digital screens to view a slideshow of Black History facts.

Extra Helpings of Soul Food. Every Friday, the cafeteria will offer a menu that highlights some of the traditional food offerings, collectively known as "Soul Food." Please read below in the Upper School section to learn a brief history of Soul Food.

Thematic Books. The Friends Free Library will have a display of books, authored by African Americans, under the theme of Celebrate, Educate, and Illuminate. Celebrate the achievements of those who have come before us; educate ourselves about historical and current events that affect us; illuminate the path for others.

Teach Us All Screening. The GFS Multicultural Parents Alliance, Alumni of Color Initiative, and Office of Diversity, Equity and Inclusion invite parents, students, neighbors, and friends to a screening of the documentary film Teach Us All. This film is centered around the social justice movement aimed at providing equal access to quality education for all students in America, and focuses on education equity and school desegregation. See the journey from the Little Rock Nine to now. The event is on Sunday, February 25, from 2-5 p.m. in Yarnall Auditorium, and refreshments will be served. For more information and to RSVP, please click here.

The Lower School will spend the month of February leaning into the learning opportunity presented by the annual celebration of Black History Month.

The Lower School community will consider the question: "Why is learning about the past important to how we live our lives today?" This question is the start of a journey, and a guide during weekly worship sharing, for how teachers and students will explore events and people in Black History. We are encouraging teachers to gather students in different configurations (classes, partners, or grade-level) and to record the arc of their revelation around the query over time. Throughout the month—and beyond—we will make resources available to support this continued learning.

Lower School Assembly: Josephine Heard. On Tuesday, February 13, at 8:45 a.m. in Poley Auditorium, the Lower School Assembly will feature Josephine Heard, a performance artist and current GFS parent. Josephine, along with her drummer Baba Paul Lucas and some other performers, will take our children on a journey through Africa. Children will be engaged in both an educational and entertaining exercise that includes call and response and performance art.

Middle School Assembly: An Exploration of Black History Through Protest Poetry, Art, and Music. Middle School students will spend time during the week leading up to the assembly exploring different eras of protest and the various messages of protest through the arts. During the assembly, which will take place on Wednesday, February 21, at 10:25 a.m. in Poley Auditorium, students will share protest pieces that they have discovered along the way.

Soul Food Fridays: Celebrating African American Culture Through Food. Every Friday, the cafeteria will offer a menu that highlights some traditional food offerings, collectively known as "Soul Food." This idea was proposed by 9th graders Ryan Lewis, India Valdivia, and Dhmyni Samuels as a way to honor the cultural heritage and traditions of generations of African Americans. These students, along with some faculty and staff members, have worked with our cafeteria staff to craft menus that will appeal to many, including vegetarian offerings. Below, please read about the origins of Soul Food and its strong place within the African American community.

What is known today as 'soul food' dates back to the transatlantic slave trade. Enslaved Africans in the U.S. and the generations that followed were forced to do hard labor, burning more than 3,000 calories per day. The necessity to eat economically and abundantly was essential to survival. Yet slave owners provided little more than the kitchen throwaways such as pig's feet, chitterlings, hog jowl, broken rice, and re-used lard to feed the laborers. African American women, typically in charge of cooking the meals for the community, used West African cooking techniques, such as stewing or frying, and generous doses of ingenuity to transform throwaways into food high in the starch, fat, sodium, cholesterol, and calories that would sustain their fellow slaves during long days of labor.

Slavery was officially abolished in 1865, but poverty and social segregation continued to further the cuisine's evolution. In the South, Jim Crow segregation laws prohibited African Americans from eating at many restaurants. Coming together over home-cooked meals, especially in churches, became an important part of community and belonging, as well as political organizing. Those who migrated north to find factory work brought recipes with them to the jazz clubs and eateries that served as gathering places. By the time the Black Power Movement gained popularity in the 1960s, the culinary tradition had established itself as part of African American cultural identity. Leaders reclaimed and renamed it as 'soul food,' giving it new life that would carry it into mainstream American culture over the next fifty years. (From Frederick Douglass Opie, Hog and Hominy: Soul Food from Africa to America)

The present day African American population, like many other ethnic groups, is several generations removed from its original land. Thus, many practices and habits have been lost, dropped, simulated, or modified. However, African American rites, religious events, and familial gatherings still tend to be centered around the coming together over food--whether that be in planting and growing of food, preparing meals for large celebrations, or simply sitting down as a family for Sunday dinner. (From June Ewing and Felicia Lonas, Cultural Diversity: Eating in America: African-American)

We're looking forward to experiencing the richness of Black History Month with you!