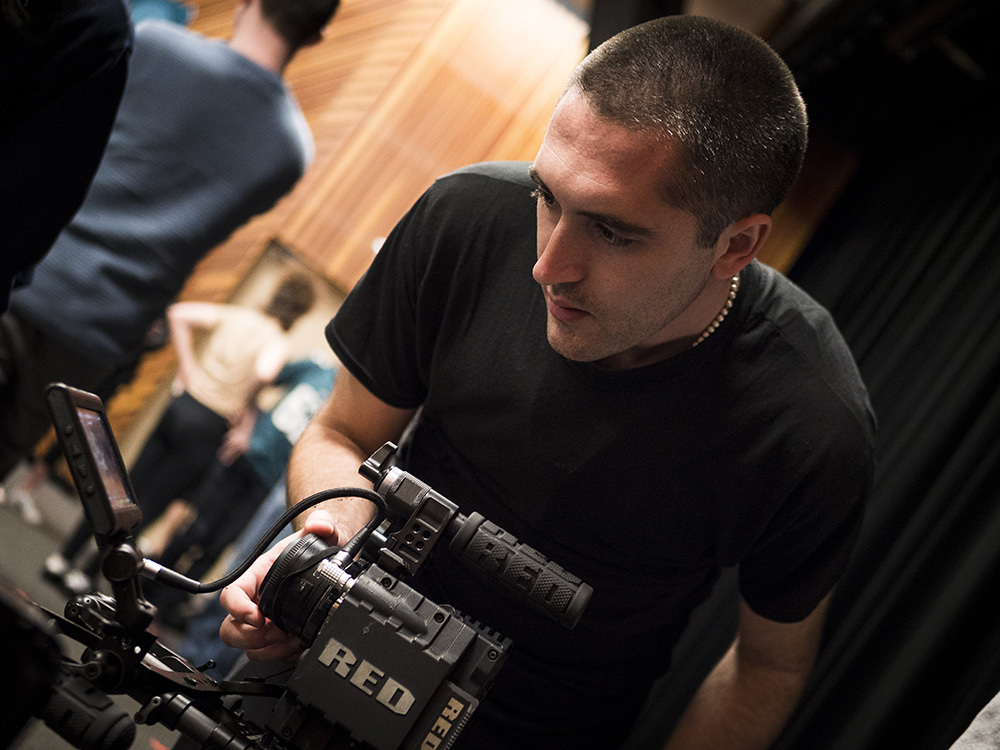 "It's easy to make a film, but it's hard to be a filmmaker."

That's the sentiment that André Lee has been bringing to his Intro to Filmmaking class this term, especially when he realized that many of his students entered the class with advanced skills that were beyond his expectations.

André's been shaping the curriculum around their needs and skill sets accordingly, and this past week featured a visit from his former mentee, alum Alex Favin '07. (Pictured above.) 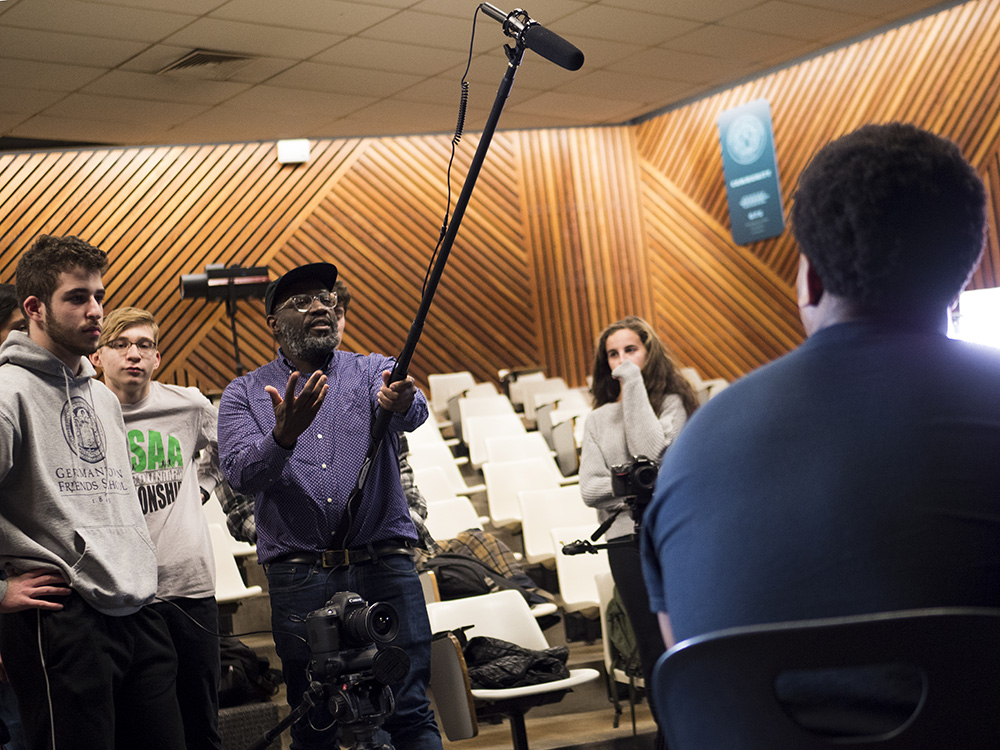 Alex, now co-owner of Creative Outfit Inc., a local media production company, introduced the filmmaking class to industry-leading audio, lighting, and camera equipment, and allowed André 's students to use and experiment with this equipment to create their own short films.

The film students crowded the equipment with excitement. Within seconds of unveiling the RED camera (one of the fanciest, most high-end cameras there is), a student asked, "Is this what they use in Hollywood?" (Yes, blockbusters such as The Hobbit and Star Wars Episode VII: The Force Awakens, have used RED cameras.) 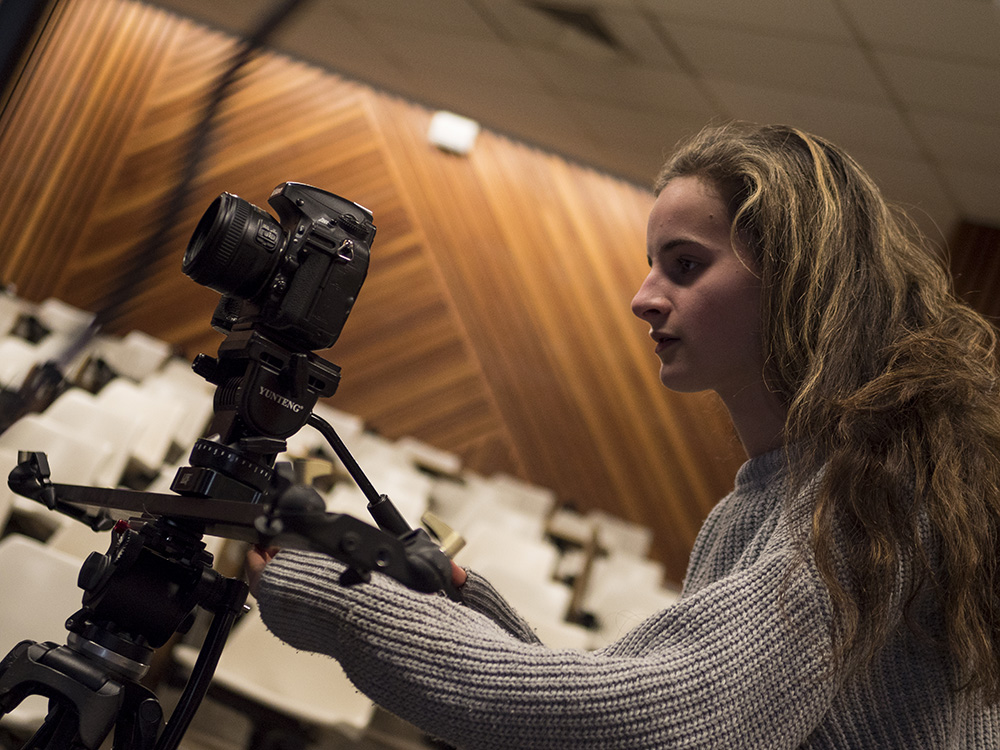 But high-end equipment will only get you so far—film students still need a subject to shoot. Lisa Burns, co-chair of the Theater Department, asked her drama class students to participate as well, and they performed improvisational sketches as the film students recorded, adjusted the three-point lighting set-up, and operated the sound equipment.

Throughout the period, André prodded the students to take on different roles, try out the equipment while gently offering technical advice: "What do you say on set when the boom is in the shot?" "Notice that the chord on the boom is flapping. You'll need to secure that or it will ruin the audio. Incidentally, who knows what kind of tape is used on sets?" "Let's talk about camera movement and the technique behind it." 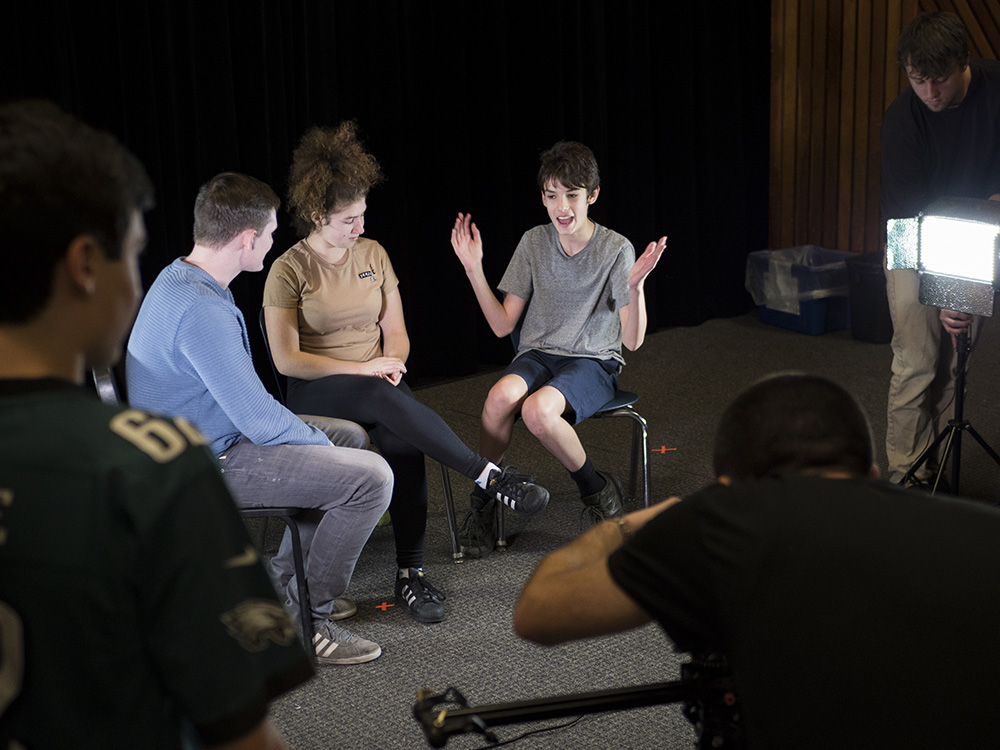 Alex and André have had a long collaborative relationship. André explains, "Alex and I have worked together since his sophomore year at GFS. I was working on a short fundraising film for the Community Scholars Program. Alex saw us filming on campus and said he planned to work in film someday. I put him to work on our production that first day we met. He did some light PA [production assistant] work and also operated the boom pole for a few segments we filmed on campus. We stayed in touch during his time here and he did his Junior Project with me, where we worked on a film I was producing for RuPaul and went to Sundance. We've stayed in touch and worked together on numerous projects since first meeting in tenth grade."

What's next? Alex departed with the footage and audio recorded by the class. He'll spend the week editing it and return to show them the results of their work.