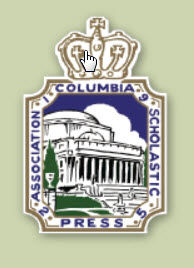 Congratulations to six student writers, photographers, and designers from our Earthquake newspaper staff for their awards from the Columbia Scholastic Press Association. These Gold Circles are awarded to students for excellence on individual pieces of writing, photography/art, and design. From more than 6,500 submissions from print news and magazines, a total of 720 awards were given in first, second, third, or certificate of merit.

Isabel Mehta '20 won second place in the category of "non-fiction article" for her piece titled "Are School Dialogues Still Effective?"

Marlie Golden '19 and Ava Sinai '20 won a certificate of merit in the category of "non-fiction article" for their piece titled "New 'Coffee and Books' Café Finds a Balance."

Sophie Starr '18 won second place in the category of "non-fiction interview" for her piece titled "Concussed."

Will McQuillan '19 won a total of five awards:

- first place in the category of "design of a single spread" for the design of the piece "Are School Dialogues Still Effective?"

- first place in the category of "single subject feature package" for the piece "When Do Confidential Concerns Cross the Line?"

Read more about the awards here.

Earthquake has also been named as a finalist for CSPA's Crown awards for our overall publication, which will be awarded in March.

And, the staff of our Middle School online newspaper, The Corner, won a 3rd Place award for "headline writing." Note that the middle schoolers compete against high school students in this competition.

Congratulations to Isabel, Marlie, Ava, Sophie, Cassie, and Will and the rest of the editors and staff from last year and this year for making such a fantastic magazine that we can all be proud of.