Insights from a Quaker Soldier 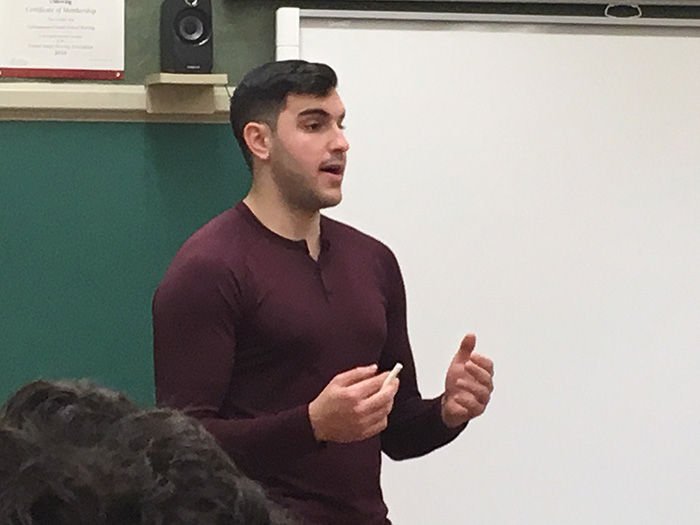 At first glance, Danny Ceisler '10 might seem like an unlikely military intelligence officer. After all, he's a GFS lifer and a self-described Philadelphia-area progressive.

But, Danny says, "My GFS education was the best training I could have possibly had."

At first glance, Danny Ceisler '10 might seem like an unlikely military intelligence officer. After all, he's a GFS lifer and a self-described Philadelphia-area progressive. (In the Army, his dog tag listed his religion as Quaker, and that's pretty uncommon.) But, Danny says, "My GFS education was the best training I could have possibly had."

This week, Danny spent time in Jeremy Ross's US History class, speaking to seniors about how and why he joined the Army, his time in Afghanistan, and how thoughtful, creative students—such as those that graduate from GFS—might be just the people needed to devise solutions to military conflicts.

For his undergraduate work, Danny attended The George Washington University, where he got a full ride thanks to his involvement in the Army ROTC, a four-year officer training program. Danny acknowledges that his involvement in ROTC was a kind of rebellion at the time. "I didn't like Quaker stuff while I was here. I didn't like Meeting for Worship. I didn't appreciate all of the focus on diversity—I thought, 'Why spend so much time on this?' But it all clicked for me after I left." And, Danny says, "I thought that people like us should be pulling our weight in the military. The Army is an incredibly diverse organization, but people with our background are severely underrepresented. I was able to bring something a little different to the unit."

After graduation, Danny served in the Army Reserves. His training was in military intelligence, and he was eager to put his training to use, so when a chance arose to go to Afghanistan after he completed his first year at Temple Law, he jumped at it.

Danny explained that the mission in Afghanistan today is primarily focused on negating immediate terrorist threats to Afghan civilians and to the US. Danny's intelligence work related to the targeting process for drone strikes. Without divulging sensitive details, he explained that the background research that takes place prior to any strike is rigorous and intensive.

A student asked if this work bothered him. Danny replied that it didn't, because he was confident in the intelligence, and certain that the alternative would have created a worse outcome. "These were really bad people. These guys were trying to kill innocent people, gain power and generate instability."

So, what's next for our role in Afghanistan? Danny and the students discussed that nation-building, the process of trying to install democracy, hasn't really worked, and that endless war isn't an appealing option either. It's hard to get out of conflicts. A student commented that there must be another way out, some other creative solution that isn't nation-building or endless military involvement. Danny agreed, although he admitted he doesn't have the answers. "If there is another answer, start thinking about it now," Danny urged. "There's got to be another creative solution. That's why we need people at GFS to grow up and come up with something better."