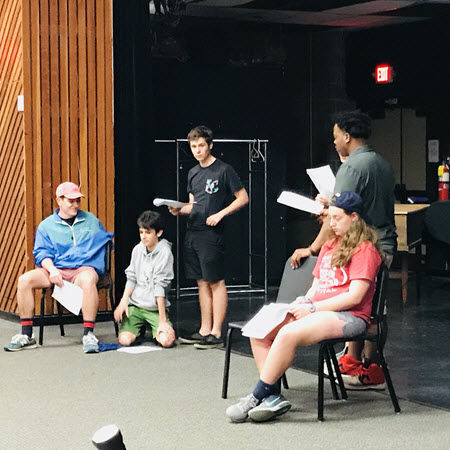 In addition to our talented student writers, actors, and directors, this year's Poley Fest featured Julie Rottenberg '88, known for producing hit shows "Sex and the City," "Smash," and "Odd Mom Out," and, most recently, "Divorce," on HBO. Poley Fest runs from 5/15-5/19.

Poley Festival, named after Irvin C. Poley, an alumnus and teacher who introduced the importance of drama and theater to a Quaker education, gives student playwrights the opportunity to showcase their original works and allows them to explore writing, directing, and acting.

This year's Poley Fest features Julie Rottenberg '88, known for writing and producing hit shows Sex and the City, Smash, and Odd Mom Out, and, most recently, Divorce, on HBO.

On Wednesday, May 16, Julie will return to the school and the festival that helped her discover a passion for drama and writing to speak to students about her career and early inspirations. All are invited to attend this assembly, which will take place in the Loeb Performing Arts Center at 10:20 a.m.

The Poley Festival opens with a series of staged readings by the students in the ninth grade drama class, Acting Fundamentals. These original works, written and directed by the students, address some of what students are thinking about most—from what it means to be an international student at GFS to local, and even global, politics.