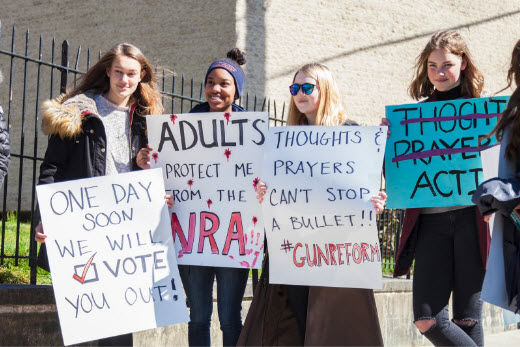 Students aren't taking a break from their efforts, and declare that they won't stop until they see change.

Led by freshmen Sona Wink and Asaf Lebovic, students collaborated with 10 other high schools from the area to implement a powerful walkout off campus, die-in at City Hall, and a rally in Center City.

As senior Alice Daeschler explained in the Metro newspaper, joining forces with other schools further amplified student voices, "We are working together with other schools so our voices are even louder and more effective, and it shows that we aren't just standing up for ourselves, but schools, families, and communities everywhere."

In preparation for the walkout, students developed a clear statement about their mission and what they want to see happen. While they understand that change takes time, students recognized the importance of providing a clear message to legislators and the media as to why they are taking a stand. Here's an excerpt:

We stand in solidarity with those in our community and across the country who have been impacted by gun violence, whether on the street, in their homes, or in mass shootings. To those that have lost their lives, or have lost family members or friends, we are walking out to acknowledge and remember you. We won't stop taking action until there is change and will continue to contact our legislators, educate ourselves and communities in person and online, ask our peers and family members to register to vote, and magnify the voices of this critical youth movement. 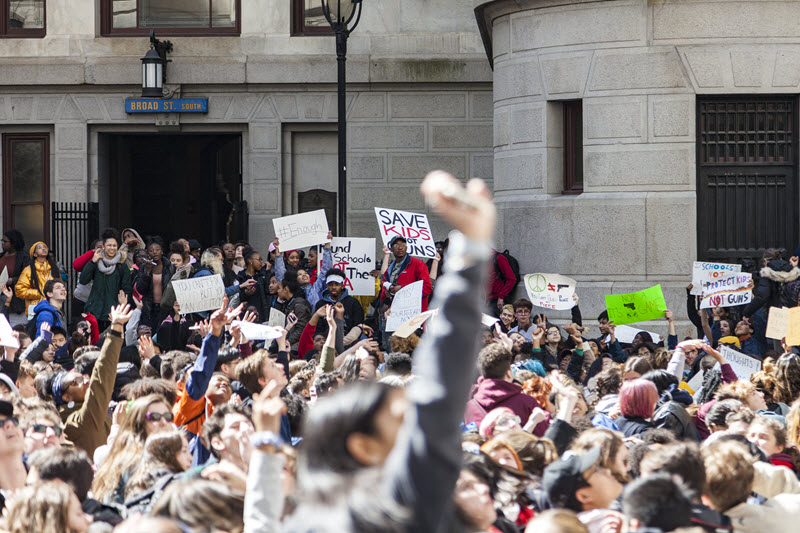 The Human Rights Club organized sign-making for anyone on campus who wanted to create bold and meaningful posters. These visuals definitely got their message out. In fact, GFS students created a large orange banner that read "#ENOUGH" which was featured on the front page of Philadelphia Inquirer (article and photo here).

Students aren't taking a break from their efforts, and declare that they won't stop until they see change. Next week, students have planned a "Gun Control Call Out Lunch" in which students will write letters and make calls to legislators during their club lunch period. As Asaf said clearly in his email to students, "If we want to create a substantial impact, we must continue to fight for gun control. We want to demonstrate how many people care about this issue."

Middle School students also had the opportunity to participate in protest efforts on April 20 with sign-making, letter-writing, and a silent 15-minute walkout, as well as allowing students to share dialogue, ask questions, and voice concerns about the current state of gun violence.

These student-led peaceful protest efforts support the school's Quaker values, which emphasize that seeking peace in the world requires working for justice and that each individual has the ability to learn from experience and that we must share that learning in our relationships and in public.

Students should be proud of making their voices heard and taking action to improve their communities. The media also recognized GFS student action with various quotes and photos, including a statement by Sona Wink in the Wall Street Journal online on April 20.

Here's some of the coverage of GFS student-led activities: 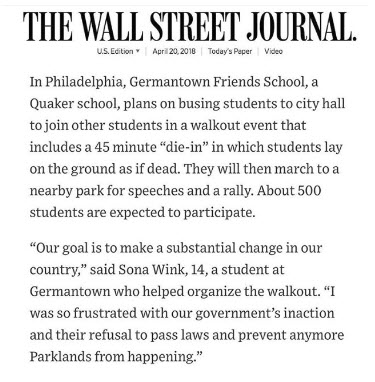 Students Are Walking Out Again to Protest Gun Violence: Is Anybody Listening?
Education Week, April 19, 2018