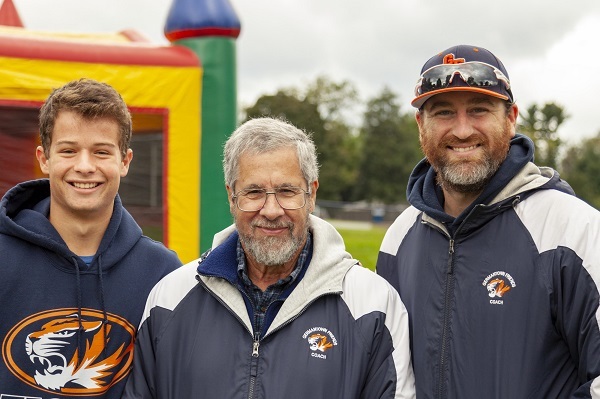 Carl Tannenbaum reflects on his forty years spent coaching at GFS, which he describes as a "joyous, fulfilling experience, a perfect complement to my teaching and administrative career."

Towards the end of the movie Field of Dreams (one of my all-time favorites) Ray Kinsella says: "I've never once asked 'What's in it for me?'" Shoeless Joe Jackson replies: "What are you saying, Ray," to which Ray replies: "I'm saying 'What's in it for me?'" During my 40 plus years of coaching, I don't remember ever asking "What's in it for me?" But now that I think about it, there was plenty in it for me. Certainly there were some frustrating times and some disappointing times, but overwhelmingly it has been a joyous, fulfilling experience, a perfect complement to my teaching and administrative career.

Seeing young athletes progress, sometimes achieving excellence and sometimes just making it to a basic level of competence, has been a very rewarding experience. Knowing that in some small way I might have helped an athlete to reach a goal makes all the effort expended worthwhile. It is just the same as helping to pave the way for a student to master a trig concept or an algebra skill. It is what teachers and coaches should always strive for.

So, "What's in it for me?" Well, 40-plus years of memories, for one thing; memories of great games and funny incidents, anecdotes, sidebars and outtakes, memories of successes and failings, wonderful colleagues and most of all unforgettable athletes (some talented and some not-so-much). I am honored to have been given the opportunity to coach so many athletes over my career. I am sure they have given to me at least as much as I have imparted to them and for that I thank them. I truly appreciate all of my colleagues who coached with me over the years, and especially those who I counted on during my tenure as athletic director. They allowed me to do my job without having to worry about them doing theirs.

And so, "What's in it for you?" Here is a link to a sampling of my memories of 40 years of athletics at Germantown Friends. Enjoy! And thanks for the memories.

Carl Tannenbaum is a beloved educator and coach at Germantown Friends School. He retired in 2016, but remains a dedicated presence on campus. Katie Bergstrom Mark, Director of Athletics, describes Carl's influence:

"I think the amazing thing about Carl's tenure has been his wide-reaching influence in every aspect of athletics — as an athletics director, as a founding member of the Friends Schools League and as career-committed JV coach. I admire his relentless effort to record the history of GFS athletics and keep it up-to-date. In his four decades of coaching, he has mentored so many young athletes, always willing to share his knowledge, energy and dedication in order to enrich the student experience."